Davao is home of eateries with Michelin caliber. These are home-grown food houses which serve palatable delicacies. Their delectable dishes qualify for a worldwide food recognition based from the length of daily queues and the stories of satiety since they started serving for their first diner-turned-patron.

Spending most of my 2016 trips hunting for such award-winning street food made me create a set of criteria why one dish is worth for the Michelin mention. Such is my basis enumerating the following as the first worth-to-try food in Davao. A list of eight (8) for the city’s 80th Charter Day celebration. 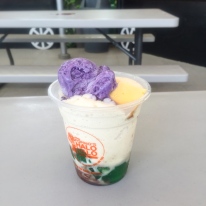 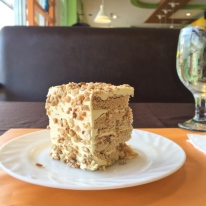 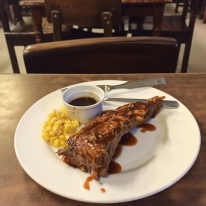 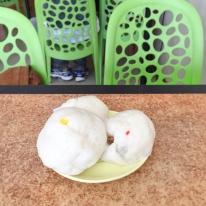 Davao Famous Restaurant and Cecil’s have been serving for almost 50 years like Ying Kee in San Po Kong. Lachi’s, Em’s, Kuilan’s and Aling Foping’s serve pastries and desserts which are as Michelin-mention-worthy as that of Kwan Kee in Sham Shui Po and Kei Tsui and Joyful Dessert House in Mongkok. Lyndon’s, as ironic as it termed its specialty is indeed one of the best pork rib versions in the coty. It is grilled and sauced savorily like that of my top favorite Satay served by Lan Ying in Kowloon City. Ultimately, the braised Carabao meat served by Bulca Chong is a dainty endemic dish, inducing that distinctly Davao redolence even years after completing this gastronomic itinerary.

*Download DAVAO GUIDE APP in your phone to weave these eateries in your itinerary. It is “smart” to visit Davao in March-May (Summer, Araw ng Davao – 2rd week of March), August (Kadayawan Festival) and December (New Year’s countdown with the Torotot Festival) 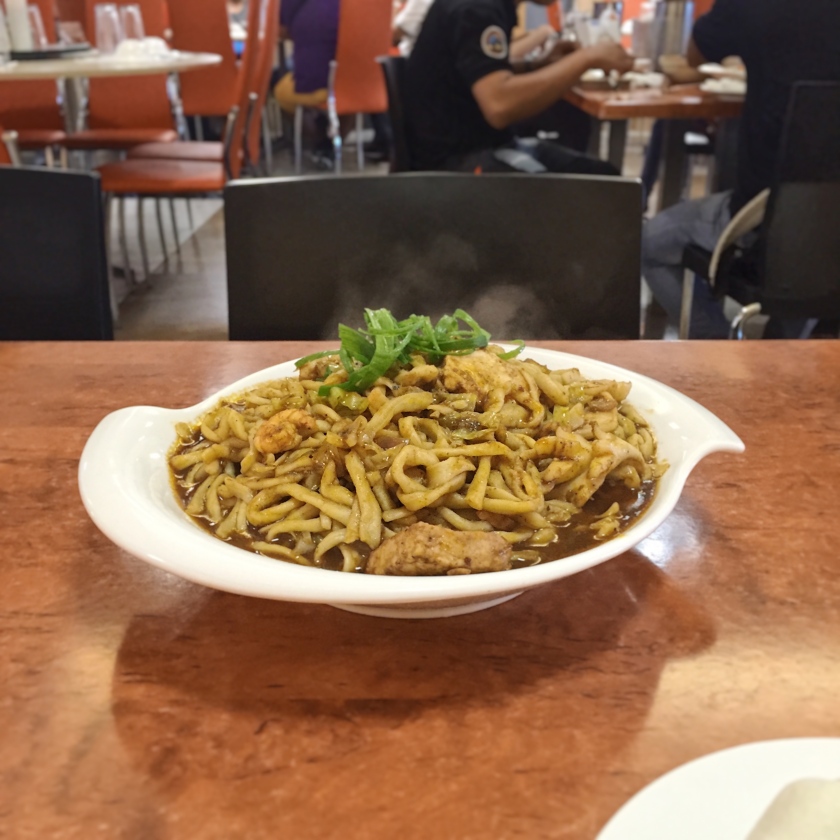 Partaking endemic meals with locals has always been my travel fetish. Thus, I would recommend having your lunch or dinner here to enthrall your appetite dining with Davaoeno families. For shorter queue though, be here as early as 6:30 am. “Tanan man” (All), that is what typically the server’s answer when you ask for the specialty. A matter of fact since 1968 when it started as “Davao First Restaurant”

. The Hysian Sateme (Seafood Sateme) is my favorite in the menu. You will love the chunks of fish and squid giving variations as you chew with the noodles. Cinnamon – Soy tandem makes that sauce a bomb. Its spiciness teases you too. A reception area where queuing family could wait is set-up when they opened the renovated part. 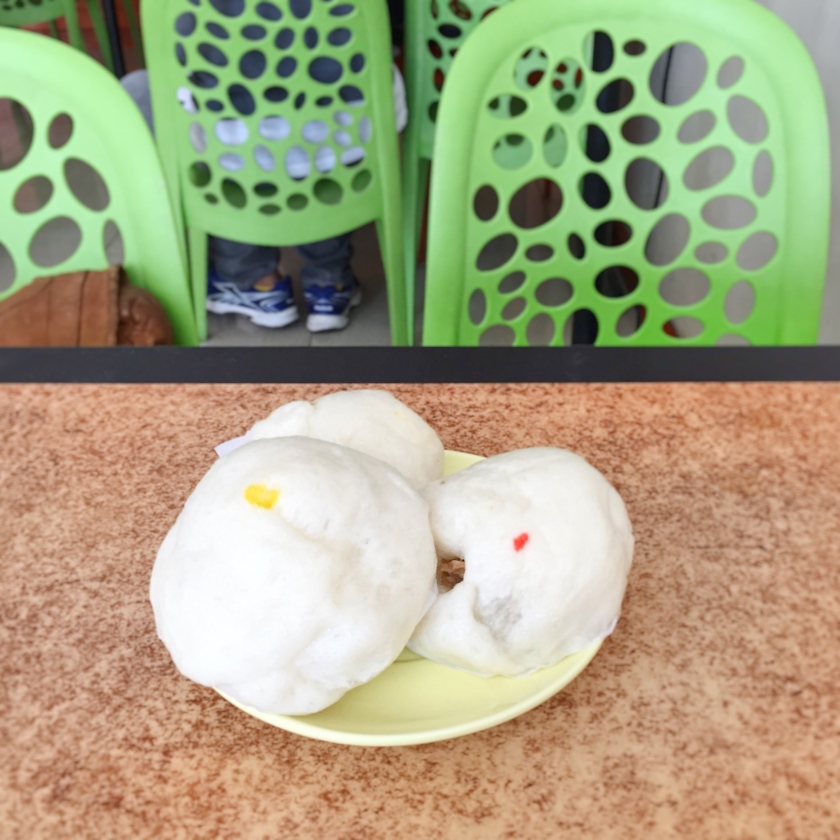 These steamed buns with meat (pork or chicken) are perfect for breakfast or heavy afternoon snack. Come here by 6:30 to 8am. You will love munching these buns as your first meal for the day when the Davaoeno “grannies-in-SUVs” will be your meal mates. Try eating these with a local 3-in-1 coffee like them, eavesdrop and act like a local! I love that kind of immersion. The whole stretch of Dacudao St. where Kuilan’s main branch is located, is arrayed with venerable trees blowing the most freshening air among Davao streets. Reeeelaxing.

Be come later than 2pm since they run out of Siopao late in the afternoon when most of those who queue are just up for take-out. I usually bring my guests here to take these buns as pasalubong since these meat breads could be stored in the fridge until a week. The road going to the flyover just as you go out from Kuilan’s is leading to the airport.

*APP TIP: Navigate to “Places”. Scroll  to “Heritage”. Then “Chinatown”. Either from Davao Famous Restaurant or Kuilan’s, it’s near towards the city’s Chinatown district. Affordable shopping or merely immersing yourself to the locals while strolling around – Just dissociate. “Kublai Art Gallery” is also within the Chinatown district, the last street towards the Chinese Archway facing Magsaysay Park. You could also “Eat Durian” after all the strolling, just in front of the Magsaysay Park. The Sta Ana Wharf which will be your departing point when you want to explore Samal Island, is just beside the park. Hop in a “Route 10” jeepney if you’re from Davao Famous and notify the driver to hop you off in Uyanguren (Chinatown). It is best to take the taxi when you are going to Kuilan’s in Dacudao. Same as from Kuilan’s to the Chinatown.

Meat is so tender. It seem programmed to auto-shred from the ribs just before your cutlery lands on it. Literally melts in your mouth. Get the 350G, an additionl rice and a serving of Lumpia Shanghai. I love eating this with a local beer within the bizarro wall paintings inside like your eating with Charlie Chaplin, Jonny Bravo and the Men in Black. Here’s a tip, when the portions you want isn’t anymore available,

*APP TIP:  Walk a bit going left once you’re out from Lyndon’s until you reach the end of Roxas St. Hop in to a Route 4 jeepney going to San Pedro Church. Hop Off  where there is an overpass near the San Pedro Police Headquarters, “D’ Bone Collector” is just on the other side of the overpass.

Cecil’s has been serving the Davaoenos since 1963. This famous dish from the  Visayas is one of their specialties. One of the two restaurants on the list which when a server is asked for their

specialty, they seem to recite all that is written in their menu, “Tanan man Sir.” You will love seeing families share their portions here while talking about their day. A dining table away from home. Dad takes few dipper of Batchoy, school-aged daughter samples a bit of the Choco moist cake while mom nibbles some of the egg pie. Then, take turns who is to eat the next morsel from which serving.

SERVICE: 8:30 am – 6:30 pm  I  BILL: 90p/bowl  I  TRY: Mami, Pancit loglog, Chocomoist cake, Egg pie  I  QUEUE: Long during snack time and after 5pm, serving for 54 years with 10 other branches. I LANDMARK: University of Mindanao (UM) Bolton Campus, CAP Auditorium, Hop in to any jeepney which passes by UM Bolton. Hop off and ask locals where’s CAP auditorium near Cecil’s.

*APP TIP: Walk two blocks away left where the oldest church of the city’s found, the San Pedro Cathedral. Take a “heritage walk” which you can start with other tourists in Museo Dabawenyo.

I am sure I am getting the cheers of the boozing public when they see this here! The only which serves 24 hours in this list. Bulca Chong indeed is the most native food among the eight. You will love this dish. Period. Then you will love it most after 2 AM when the gang just finished the last round of beer ending the night. (Davao has been imposing a liquor ban after 2 AM. Bars and shops are allowed 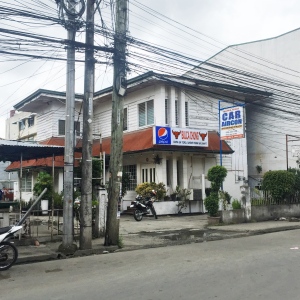 to sell alcohol only until 1am.). Best with the throat stabbing ice cold colaaah!

SERVICE: 24hours  I  BILL: 95p/bowl  I  TRY: Balbacua  I QUEUE: Long during dinner time and after 2am, serving for 19 years with another branch in Sandawa area. I LANDMARK: Gaisano Mall Illustre, Davao Doctors Hospital. Hop in to jeepneys which pass by Quirino St. Hop off to Davao Doctors Hospital. Cross the street towards KFC fastfood. Walk left towards the next block. Walk right till you reach Bulca Chong. 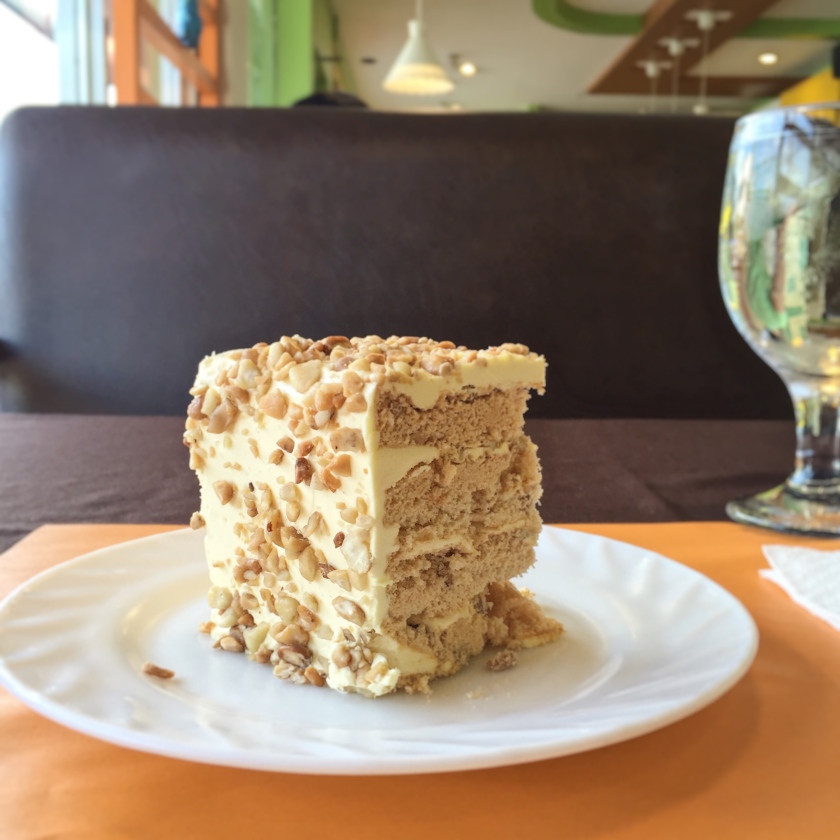 Tasted the French dessert, Dacquoise? Sans Rival is the Philippines’ version. Lachi’s by far has the most ambrosial layers in Davao. You will love spending time here. Choose those couch beside the glass windows so you 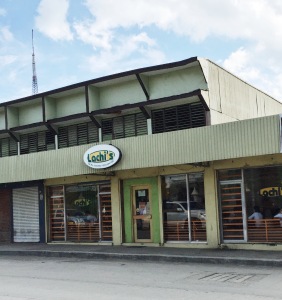 could feel the neighborhood cafe charisma of the location while nibbling portions of Sans Rival (It is located inside a subdivision).

SERVICE: 11am – 8pm  I  BILL: 72p/slice  I TRY: Five chocolate torte, all cakes  I QUEUE: Long during snack time and after school hours, serving for 15 years with only one branch with rice meals in Marfori and a cake-only branch in Tulip Drive, Matina. I LANDMARK: Marfori Heights Subdivision. This is the farthest from the city proper among listed, so better to take taxi. You could take a tricycle alternatively from Davao Doctors Hospital in Quirino or from Davao Wisdom Academy in Torres to the Davao National High School (DNHS). Then from DNHS to Lachi’s in Marfori Heights. Seven (7) pesos per tricycle route. 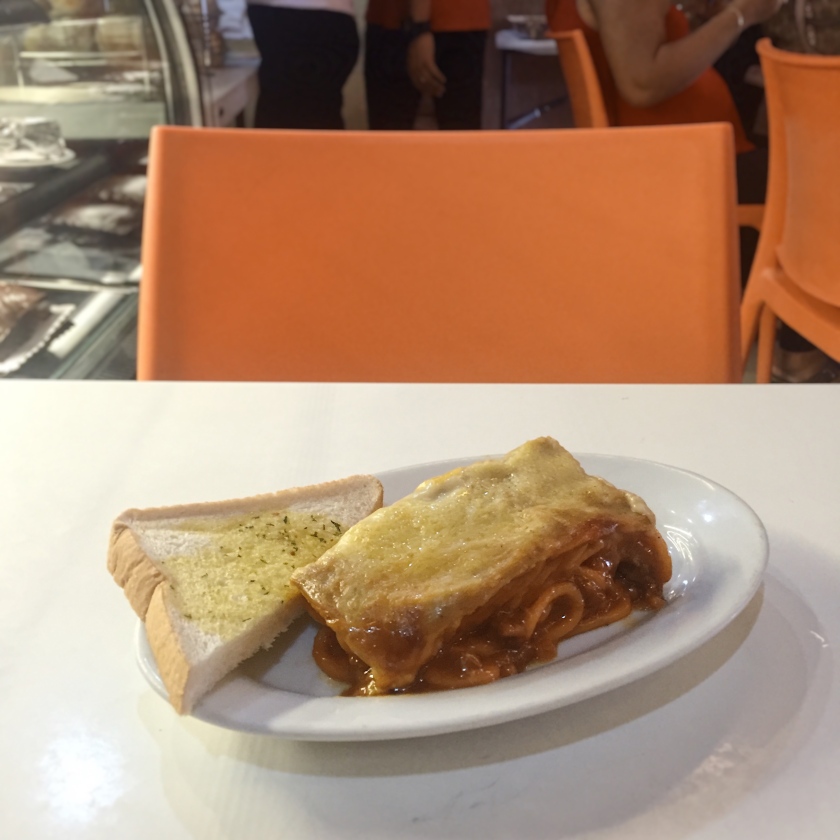 Can you just scroll up again and look at those almost golden cheese roofing those pasta? Get your first bite the soonest this is served while those cheese are still hot fresh from the oven. You will love it as almost crispy. If Lachi’s gets the authority for Sans Rival, Ems gets for pasta dishes.  After trying the “Primera” Spaghetti, you will be torn between it and the “Baked” the next time. Ems started in Cotabato City in early 2000s. In fact, its 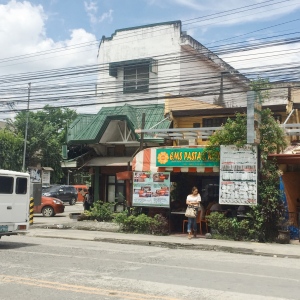 front signage still has Cotabato before the “Ems”. The family decided to transfer in Davao and the Davaoenos since then are thankful for such exodus. Recite it with me, “Mille Grazie!”

SERVICE: 8:30am – 8:30pm  I  BILL: 70p/serving  I  TRY: Lasagna  I  QUEUE: Long during snack time, lunch time and after school hours. Serving for 13 years with only one branch which is now in reconstruction for a second floor. By Summer, Ems will be branching out among NCCC Malls. “Bravo!”

Davao’s version of a Philippine dessert rock star. It is like a sherbet. Look for that quarter size paper with the checklist to customize your portion with 6 ingredients, from cubed gelatin to sweetened Saba. Write your name. Pay and wait. Be in the Matina Town Square (MTS) branch by 9pm when you wanted to enjoy more the place and the crowd with

band performances and array of bars inside the premises.

SERVICE: 1pm – 12mn  I  BILL: 60p/”petite”  I  TRY: Durian Halo-Halo, Chili con Carne  I QUEUE: Long during after school and office hours in the MTS branch. Most of your queue mates are students from nearby schools and young professionals. Serving for 12 years with other branches in SM Lanang (MALL) and Eden Paradise Resort I LANDMARK: Ateneo de Davao High School campus, Matina Town Square (MTS)

John is a millennial Closer behind www.johndappercloser.com. He writes about the Corporate lifestyle, Sales tips, Menswear and Davao city's Bleisure scene. Join his Closer-to-CEO journey on Facebook and Instagram, @johndappercloser. View all posts by John Llamas

Happy Zoo-nday at @amayaviewph
Last January 18, 2022, I met my youngest best buddy 👶 Happy Birthday, Anak Kolmie!
Cottagecore Christmas Dinner with the @davaobloggers 💙🧡🎄
Any destination recos for 2023? Family-friendly ones please.
Started the month of parties with @cocacolaph 🥤🎄
Last day today for a chance to own your @nissan.ph car at up to 1️⃣9️⃣0️⃣,0️⃣0️⃣0️⃣ less!
Jasmine's 24th Birthday dinner 💐 Paid the bill through @mayaiseverything and got another gift: Instant Cashback 💚 SWIPE ACROSS. We both loved the pork chop and the @officialomertadavao house salad! Superb service by Queen too! Going back to try the cocktails hakhak
Sunday 🩲🩳🩱
Me "looking" forward to the weekend 💼🧢🌴
Have you felt the urge to binge-watch another trending K-series but you just can’t since you are still paid to work by the hour? Here is a tip. Devour a Korean dish on your meal break! SWIPE ACROSS. 💚
Capping off the week with coffee and crypto 🤑 SWIPE ACROSS. Not only will you be able to enjoy convenient cashless payments with @mayaiseverything - you'll also get free Bitcoin for your purchases! Yes. FREE BITCOINS.
Linen selfies 📸 SWIPE ACROSS. Which color should we wear next?
Join 57 other subscribers

Happy Zoo-nday at @amayaviewph
Last January 18, 2022, I met my youngest best buddy 👶 Happy Birthday, Anak Kolmie!
Cottagecore Christmas Dinner with the @davaobloggers 💙🧡🎄
Any destination recos for 2023? Family-friendly ones please.
Started the month of parties with @cocacolaph 🥤🎄
Last day today for a chance to own your @nissan.ph car at up to 1️⃣9️⃣0️⃣,0️⃣0️⃣0️⃣ less!
Jasmine's 24th Birthday dinner 💐 Paid the bill through @mayaiseverything and got another gift: Instant Cashback 💚 SWIPE ACROSS. We both loved the pork chop and the @officialomertadavao house salad! Superb service by Queen too! Going back to try the cocktails hakhak
Sunday 🩲🩳🩱
Me "looking" forward to the weekend 💼🧢🌴
Have you felt the urge to binge-watch another trending K-series but you just can’t since you are still paid to work by the hour? Here is a tip. Devour a Korean dish on your meal break! SWIPE ACROSS. 💚