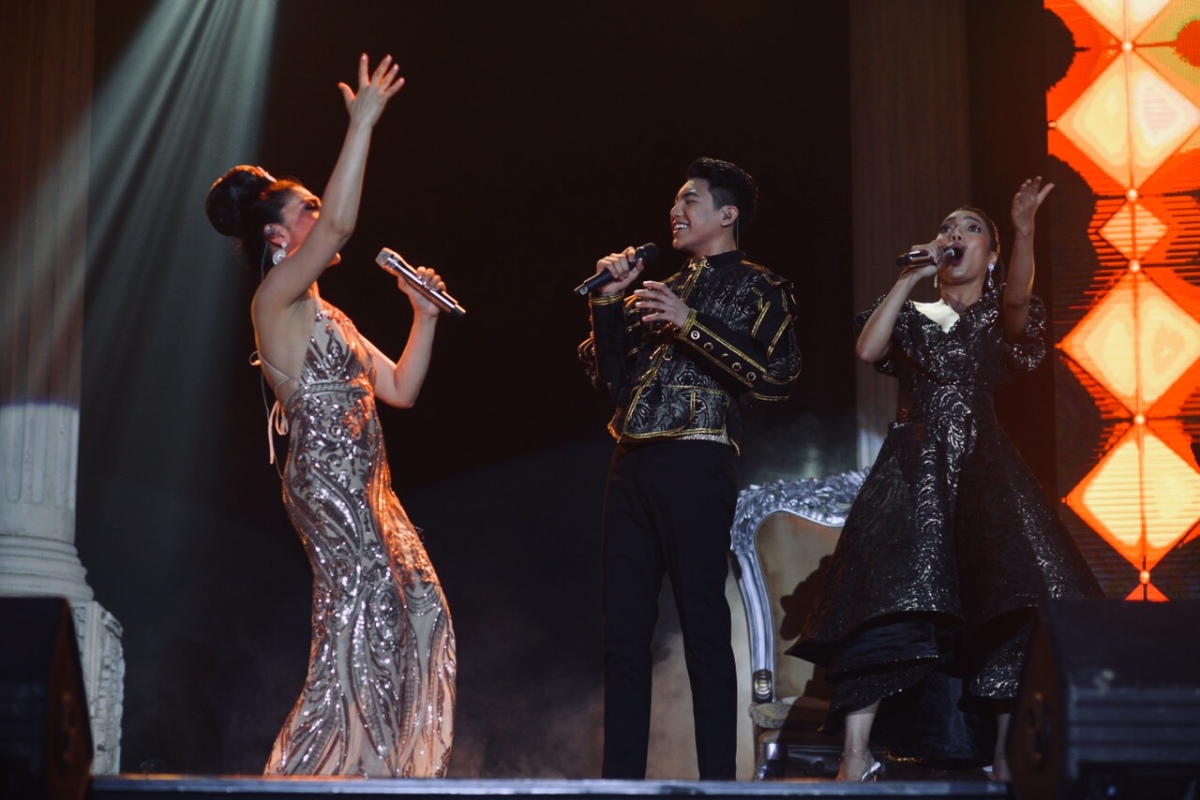 “Ace” the term which perfectly describes the artists of CCC Productions’ latest venture into the concert scene. Thus, it is tagged as,  The Aces.

ACE – of first quality or high rank; a person who excels in something. In most card games, it is the card with the highest value.

Tickets are available in all SM Tickets outlets.

He may be the youngest in terms of age, but 17-year-old Darren is more than capable of holding his own in the company of veteran singers like the other Aces. Darren started singing at the tender age of two and rose to fame in the Philippines after placing second in season one of The Voice Kids in 2014. His first album “Darren” debuted at No. 1 and has since been certified Double Platinum; his second album “Be With Me” also went to No. 1 and is now certified Platinum. Darren’s current single “Poison” is currently climbing the charts, and his third studio album will be released soon.

Shortly after winning season one of GMA-7’s Pinoy Pop Superstar, Jona—who at the time was still going by her real name Jonalyn Viray—became an in-demand performer and recording artist. Jona’s first studio album On My Own turned Gold, and her self-titled second album yielded a hit single in “Help Me Get Over.” It went on to win Song of the Year at the 2014 PMPC Star Awards for Music. A year later, she made headlines when she transferred to the Kapamilya network and changed her stage name. She has released an album under ABS-CBN’s in-house record label Star Music, which was eventually certified Platinum. She has also filled concert venues here and abroad, both as a solo performer and as part of a group.

Asia’s Nightingale, The Siren of the Strip

​The diva known as Asia’s Nightingale hardly needs an introduction. Lani’s career spans decades and includes an impressive stint performing in Las Vegas, where she became known as the Siren of the Strip. During her time there, Lani performed with the Society of Seven at Bally’s and the Flamingo, making her the first Asian to headline a main showroom on the Las Vegas Strip. Lani’s career in the Philippines is nothing to sneeze at either, as all of her albums have been certified Gold or Platinum.

​What if these three spectacular talents of the Philippines’ Music Industry are put together in one show?

You just have to be there!

​The Aces is directed by Marvin Caldito. 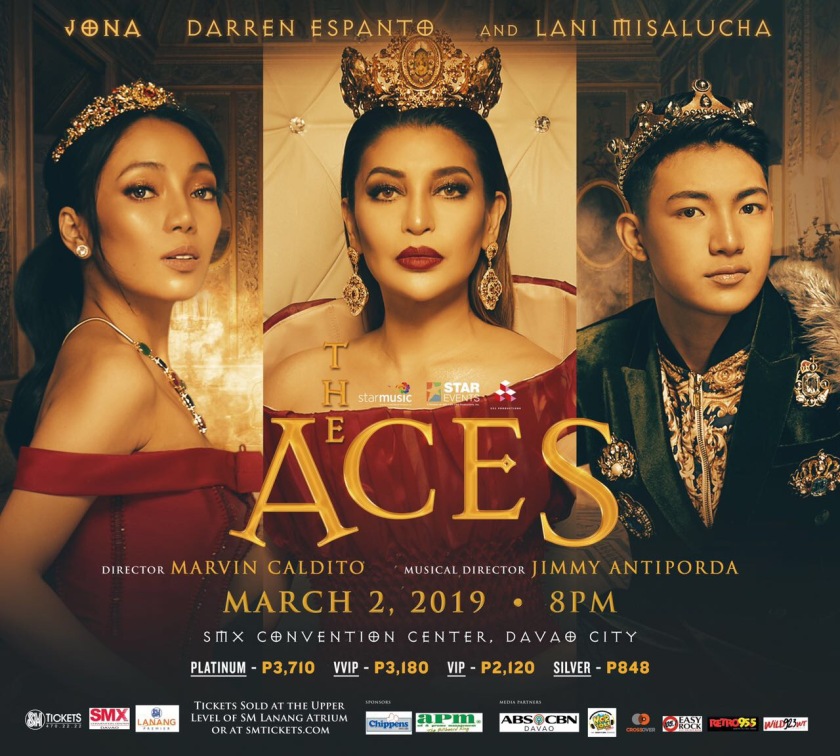 Tickets are priced at Php3,710 for Platinum, Php3,180 for VIP, Php2,120 for Gold and Php850 for Silver tickets. Tickets are available in all SM Tickets outlets.

John is a millennial Closer behind www.johndappercloser.com. He writes about the Corporate lifestyle, Sales tips, Menswear and Davao city's Bliesure scene. Join his Closer-to-CEO journey on Facebook and Instagram, @johndappercloser. View all posts by John Llamas

No matter how busy this week gets, remind yourself to refresh. @parkinndavao gives you 6 healthy sips how. SWIPE ACROSS. More on today’s IG story at @johndappercloser || TRIVIA: The hotel reception turns more colorful when it starts to bustle. Sipping the iced Nature’s Elixir perfect for a “throaty” sales pitching week 🤑 #FromCloserToCEO #ParkInn #FeelGood 📸 @carmella08
I am indeed an OG heavy snacker at work. I love trying different sweets for my office coffee. For this Q1, these @krispykremeph treats are glazing my office snack plan 😋 Swipe Across. #everyoneisanoriginal #iamanoriginal #FromCloserToCEO
On my way to meet 2020. I am so ready for you! Happy New Year, y’all Dapper Closers 💥 #FromCloserToCEO
Paying forward this year’s blessings to our fellows in the retail sales 🎄 . . . Dec. 8, a video went viral on Facebook. It showed a woman throwing a humidifier to the sales assistant’s face at a mall in Cebu. The video was displeasing to watch especially when you are a sales professional. This inspired me to check some of our fellow Closers assigned at malls to talk about how to handle situations when prospects tend to cross the line of “the customer is always right.” We also brought a pill of motivation and a cash code for their holiday needs, sealed in Christmas envelopes (all DIY 😉). This was indeed one of the most memorable paying forward interactions I experienced this year. (More on my Story Highlight: 💚PayItForward) . . . It is easy to pay it forward in your own thoughtful way. You can start this by owning a @paymayaofficial account (Steps how are on the bloglink here @johndappercloser). From December 16-31, 2019, PayMaya will match the amount of cashback earned from the ongoing 1-10-100 QR promo, and donate it to Gawad Kalinga's School for Experiential and Entrepreneurial Development. Keep on using PayMaya to give more this holidays #PayMayaItForward #ChampionKindness #FromCloserToCEO
Who else is enjoying dressing up for the holiday invitations? 🙋🏻‍♂️ Happy Holidays! #FromCloserToCEO #FleeceNow #UNIQLOPH
Feel Good Saturday, Closers! It is the weekend before Christmas week. How is the rush so far? || @parkinndavao Holidays 2019 Feel Good Deals are on the blog link here @johndappercloser #FromCloserToCEO #feelgood #ParkInn
Three weeks before 2️⃣0️⃣1️⃣9️⃣ ends. How are you, Closers? It has been such a fruitful year both in Selling and Blogging for me. Nothing but just grateful blood rushing through my heart. This gives me enough reason to celebrate the Holiday Season by being a blessing to the community and paying forward the yield of this generous year. Any unique yet thoughtful ideas to forward kindness this Christmastime? Would love to hear your suggestions. Comment them below! #PayItForward #championkindness #CloseOnSpot #2019 #christmas
Excited to this season’s reunions and dinner spread! Here is a Safari cocktail look during the @waterfrontdavao Christmas Tree Lighting Event! #CloseOnSpot #HMxMe #HMMan #ChristmasOutfit
Books are restocked for the last hours of the Biggest Book Sale in the World - @bbwbooksph ! Head on to @azuelacove.davaocity today. Over 1 Million brand-new English books are at up to 50-90% less. Add more savings and pay your book purchases through the Paymaya QR Scan To Pay. Up to 100% cashback awaits #CloseOnSpot #DontPayCashPaymaya #Scantopay #BigBadWolfBooksPH #bbwdavao2019 #bbw19lovesdavao
Thus, be crafty at all times in selling! Wishing you all an enormous 2019 net sales volume, Closers! One more month to close new accounts! More Sales tips here @johndappercloser #CloseOnSpot #strategy #psychology
House-baked pastries for Monday caffeine! Deal, deal, deal, Closers! #CloseOnSpot #mondaymotivation
Closers wear tees afterwork. We all deserve the weekend! | More about the Corporate lifestyle here @johndappercloser #CloseOnSpot #LoveGuess #weekend 📸 @jazzieellaine
%d bloggers like this: